Hurricane Sandy did its damage to the Northeastern United States in late 2012. One of the victims was a beautiful stained glass window originally created by J&R Lamb Studios and installed at Southport Congregational Church in 1903. Both the wood frame and the stained glass windows were damaged by the storm, and portions of the stained glass were boarded over. We felt that it was fitting that 111 years after creating the window, we were now able to restore it. 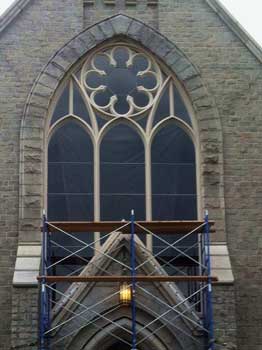 All the stained glass was removed and safely transported back to our studio, where it was completely releaded. The existing frame was initially slated for wood repairs only, but upon closer inspection, it became clear that the frame needed to be replaced. Master Craftsman Erich Kress performed his magic once again and replicated the beautiful frame, which included venting to the interior of the church and horizontal T-bars for the stained glass and protection glass that span the entire width of the window for additional strength. New protection glass was installed from the exterior and the restored stained glass panels were installed from the interior.
Historic Stained Glass Window Repair